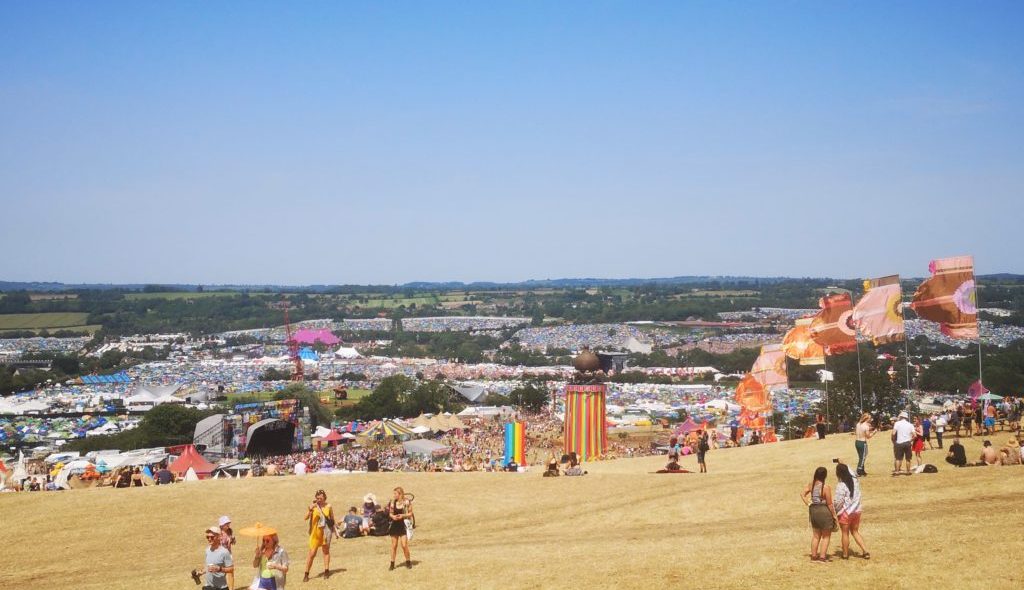 I’ve read a few blogger reviews of Glastonbury, and it’s quite easy to become really boring really quickly, with punishing lists of bands watched, drinks consumed, forensic descriptions of the toilet arrangements, and whingeing about the heat/the mud (as applicable on a particular year). I’ll try to avoid that by just sharing some random recollections.  It was my second Glastonbury after 2017 and I hope to be back again someday.  The scale of music and entertainment on offer is magnificent.
For years the Arcadia art collective ran a marvellous huge, metal, moving, fire-spewing spider with DJs.  This year they replaced it with a marvellous huge, metal, moving, fire-spewing crane with DJs.  I must apologise to anyone who was trying to listen to Carl Cox on the Friday night and kept getting disturbed by me shrieking “WHERE’S CARL COX?”  It was patiently explained to me the next day that the DJs aren’t in the rotating neon cockpit, 100 feet off the ground – they DJ at the bottom instead.  This arrangement sounds very sensible and the Arcadia folks are probably pleased I’m not involved.
Vampire Weekend’s secret set was the worst-kept secret ever.  It was great to see them twice over the weekend.  They did Horchata and Oxford Comma and I was delighted. I meant to see Mystery Jets’ secret set after Carl Cox, but completely forgot about it until the next day.

You can plan like a maniac and try to do lots of stuff.  For example I was having a chilled out time watching The Comet Is Coming, but left them to go and see Bros do a Q & A (which I thought would be a laugh, and more likely to take place than Lauryn Hill, who was scheduled for the same time).  I walked half an hour but when I got there I found out Bros had cancelled. Still, the wander had been nice.  A whole “Glastonbury on Sea” pier was newly opened this year and an excellent band called the Black Kat Boppers were playing at the entrance to it.  There was also a reggae band playing at the “Strummerville” area of the site.  I just sat in the sun for a while listening to them.

Tame Impala have been playing pretty much the same, admittedly lovely, festival headline set for years, over and over again.  The similarity between their Glastonbury 2019 headline set and the one I saw over 3 years earlier at Primavera Sound 2016 was striking.  My theory is that Kevin Parker is playing a secret Banzai-type game of seeing how long major festivals will let this go on for.

I opted for Tame Impala over Stormzy, and after getting home and watching about 20 minutes of Stormzy on the iPlayer, I feared I had made a dreadful mistake.  However Stormzy’s take on the majestic Ultralight Beam was probably the peak of his set, and the drop in quality thereafter seemed quite severe.  Rolling out Chris Martin, playing Ed Sheeran, and covering Sweet Like Chocolate – no thanks. Sweet Like Chocolate was particularly confusing.  I am happy to be corrected, but I would place it firmly in the same bracket as Phats and Small’s Turn Around. I’m sorry I missed Pet Shop Boys and Johnny Marr with the Killers, though not particularly sorry I missed the rest of the Killers set. It explains why Johnny Marr didn’t play This Charming Man earlier in the day.

I assume that, like everything else at Glastonbury, the Acoustic Stage has become increasingly elaborate.  Every band on it seems to turn up ready for the Full Band With Backing Singers and Brass Section Stage.  This causes timekeeping issues and Marti Pellow starting about 40 minutes late meant I couldn’t then see Sharon Van Etten.  (Marti you were still worth it, except for that horrific cruise ship style reimagining of Sweet Little Mystery.)

The Crow’s Nest is a great wee venue up the top of the hill behind the studio you see the BBC presenters at.  The climb seems to deter folk which means you can get within stalker-proximity to top characters like Chris Difford, Shaun Keaveny, and Brett Anderson being interviewed, with Brett in particular being an absolute feast for the eyes.

If you don’t want to end up a staggering drooling mess, you have to do “Glastonbury Day” or “Glastonbury Night”, and I was mostly Glastonbury Day.  Straight after Hot Chip I walked about 50 feet and saw the start of Annie Mac and Mark Ronson DJing. It may be the first and last-time I get to sing along to JT’s Cry Me A River in a club kind of situation.  The legendary Norman Jay was surprisingly DJing during Glastonbury Day.  It was good to see him.

I will never be a naturally gifted camper and it’s part of the experience you just need to endure. Writhing in your tent for an hour as the heat cranks up is certainly one way to shake a hangover.  On the Sunday morning I awoke to enthusiastic neighbours who had undoubtedly done Glastonbury Night, and were now recklessly attempting Glastonbury Day.  One guy was singing parts of hymns in a booming vibrato, interspersed with “I’ve just taken acid, I don’t know what’s going to happen”, while another guy kept trying to sell passers-by a toaster.

On Saturday night I saw the Wu Tang Clan.  Old Dirty Bastard’s son performs in place of his father.  They call him…the Young Dirty Bastard.  Wu Tang Clan were really entertaining (bizarrely covering Sweet Dreams Are Made Of These – which Fatboy Slim would also play at the mad Arcadia crane later on) and The Cure also exceeded my expectations.  It was great to see Robert Smith laughing at himself as he put down his guitar and worked the crowd.  I bet he will do it more often from now on.

On Saturday night I saw the Wu Tang Clan.  Old Dirty Bastard’s son performs in place of his father.  They call him…the Young Dirty Bastard.  Wu Tang Clan were really entertaining (bizarrely covering Sweet Dreams Are Made Of These – which Fatboy Slim would also play at the mad Arcadia crane later on) and The Cure also exceeded my expectations.  It was great to see Robert Smith laughing at himself as he put down his guitar and worked the crowd.  I bet he will do it more often from now on. 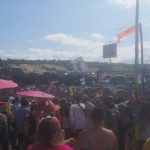