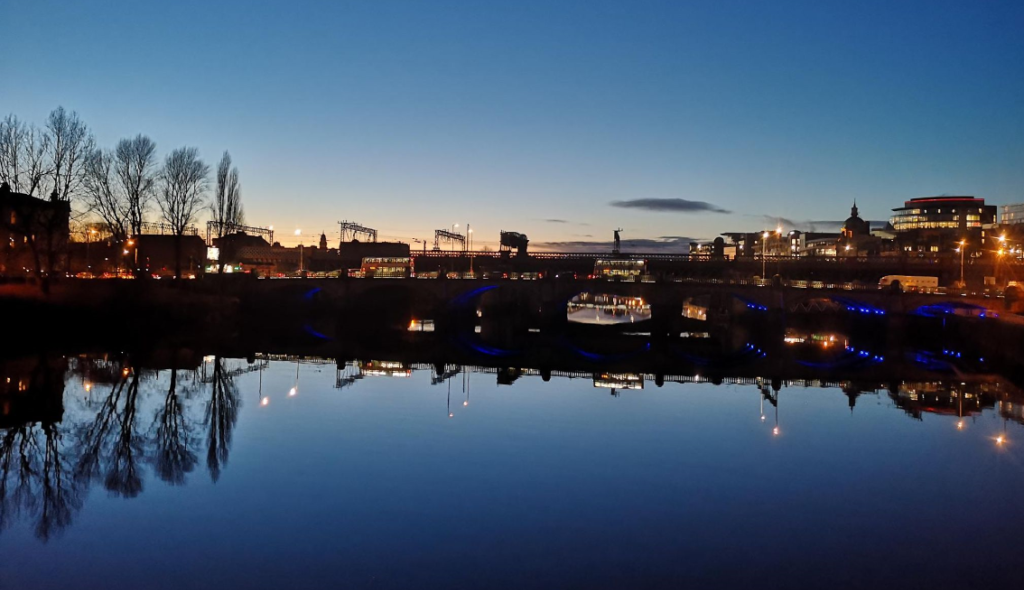 Last month I ran the Manchester Marathon. It was my third marathon and I tried to train properly, going out on lots of long runs from 1 January onwards. I ended up clocking miles all over the place. I ran to Paisley to try and see the Hunky Bodyguard Guy (I failed). I ran around Orlando and stopped for a photo with an alligator at a lakeside (apparently very unwise, and the photo came out rubbish – the ‘gator looked like a floating jobby). And a few weeks before race day, I ran 20 miles up and down the Madrid Rio and then went on a night out (my phone says I walked/ran/danced 43,873 steps on that day).

I thought it might be interesting to playlist some of the songs that I found myself listening to on repeat during training. If you want some sort of manic 150bpm playlist then this absolutely isn’t it – there are plenty of those online already, and they all include invigorating, borderline aggressive stuff like Lose Yourself, Sabotage and Firework. These songs are instead all mostly mid-tempo, suited to slower longer runs, but euphoric in their own way to keep your legs turning.

She comes highly recommended but this is the first Sharon Van Etten song I’ve got into. There’s a great Song Exploder episode explaining how she wrote this.

Heaven and Earth is, for me, Kamasi’s most accessible album, and this sludgy song is probably more “funk” than “jazz”. The choir sounds amazing and yes, it really is about the videogame Street Fighter 2.

I’m not sure if this is an official cover of Hotline Bling, or just Mr Scott taking a break from slavishly copying Kanye West by slavishly copying Drake instead. Either way it is strangely addictive and has a lovely shuddering synth bass line thing.

The Unforgettable Fire – U2

Yes I love U2 and there is no point in denying it. I went to Dublin in 2017 specifically to see The Joshua Tree 30 years anniversary tour. This is a euphoric highlight of their work with Brian Eno. For years they shied away from playing it live because it was too intricate. It’s no bother nowadays though, because of all the Muso-Gollums that they have hidden under the stage.

I saw this band in the o2 about 5 years ago and was really surprised by the huge amount of folk into them. Turns out they are deservedly really popular. It’s lovely to hear new material, even if I’m not sure it’s too much of a Screamadelica/Sympathy for the Devil pastiche.

I had no idea who Nina Kraviz was until I saw her on #thenewnormal Primavera Sound 2019 poster, and I initially read her name as Nina Kravitz. As far as I know she is no relation to Lenny, and this is the one concession to uptempo stuff on this list.

So Here We Are – Bloc Party

This is a forgotten gem from Bloc Party’s debut album, apparently written to approximate the feeling of coming up on Class A drugs, which the band all rather enjoyed doing. Which probably explains all the arguments, sackings and terrible albums that followed thereafter. (A few years back I spotted a music journalist on Twitter mocking 5ive for carrying on with only 3 members, and then plugging a Bloc Party gig. I pointed out that I was no mathematician, but by my calculations Five still had 60% original members, versus Bloc Party’s 50%. )

I was hesitant to include this as it’s a tad slow. But it’s pure 70s “AM radio” melodrama, and really very pleasant to howl along to if you are out on your own in dreadful weather and feeling kind of crazy (plodding along the canal to Bishopbriggs in the middle of a blizzard springs to mind).

“Feet don’t fail me now”! The gospel choirs, the military beat, and Kanye shouting about God can’t help but put a wee spring in your step.

You can’t have any kind of running songs list without this classic. We all know Rocky was fearsome in the ring, but it turns out he was no slouch in the jogging department either. The Philly Mag has calculated that he clocked up a mind-boggling 30.5 miles during his training run in Rocky 2 (four miles longer than a marathon).

If you fancy following me on Strava, here’s my profile.